Listen to the text 2 or 3 times and take the quiz.

You will find the text a little below 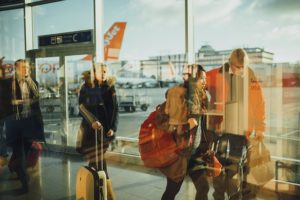 I am a globetrotter. I like discovering new cultures and civilizations, plus I love adventure and sport holidays.

I am English. I am a web designer. This is an amazing job. I must travel everywhere around the world to meet my clients.

I live in Tokyo at the moment. I love this city. There are so many people there. They don’t hesitate to help you when you are lost. So many things happen in Tokyo. There is so much to do all the time.

Listen to the text 2 or 3 times and take the quiz.

You will find the text a little below

Luke Levinson is an American student. He lives in New York. It’s quite a big city.

When he was young, he used to live in the country with his parents.

He had a lot of problems when he moved to New York, because he wasn’t used to living in such a large city. Everything seemed difficult, at first. But as time went by, he got used to it. He’s in New York because he attends a famous architecture school.